May 20, 2011
i believe it's friday, but since i actually haven't slept in anything more than a 45-minute increment since the day you call "wednesday", i'm just guessing. i'm not going to do much of an intro this week because, frankly, if i can make it through typing this without hallucinating or having a seizure, i'll consider myself lucky.

i would like to send out just a little bad karma to my upstairs neighbours, who apparently thought last night would be a great time to host an all-night "check out our new rolling chair on the hardwood floor" party in the room directly above our bedroom. may you spend some time in a particularly loud circle of hell this week.

luckily, there have been more things that have made me smile in the last seven days... 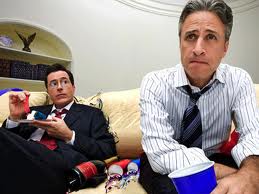 don't call it a comeback :: even before the 2008 u.s. election [a black day for political comedians in general, i think], there was evidence that the one-two punch of the daily show and the colbert report was losing its, well, punch. politicians and the journalists who follow them just weren't as entertaining as they once were. perhaps it just seemed like they'd made their points as best they could and it was time to move on.

however, despite no longer having the world's easiest target at the helm, something has happened in the comedy central sweet spot between 11 and midnight monday to thursday. the laughs are back. in fact, i'd venture to say that the writing on the shows over the last few months has been as strong as its ever been, despite the removal of bush, cheney, rumsfeld and the rest of the wild bunch. of course, the shows' other perennial easy target have been stepping up their game, offering more and more and more material that begs to be satirised as well as offering possible republican candidates from their roster of hosts and commentators [ok, one down, but you-know-who hasn't said anything yet]. or perhaps it's because, as much as we might have hoped for "change", the fact is that a lot of the same people are in charge of things and they're prone to making the same stupid mistakes.

in the end, it doesn't really interest me why things with stewart and colbert have gotten so good again, i'm just happy to once again have their a-game to look forward to four days a week.

THERE'S MORE THAT MADE ME HAPPY, PLUS THIS WEEK'S KITTY PIC AFTER THE BREAK... 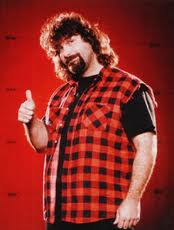 a good guy :: this week was not kind to the standing of men. [it also wasn't a good week for maids, but that's another story.] arnold aside, you had the leader of the french socialist party- supposedly the home of progressiveness- arrested on sexual assault charges. in the arts, you had one of the world's most lauded [although often most controversial] directors playing footsie with the legacy of the nazi party in what looks like a pretty desperate publicity stunt [and, i might add, a recycled publicity stunt].

but there are still good guys, if you get over the idea that they're supposed to come from areas known as bastions of liberalism or free thought. take, for example, professional wrestler, lauded author and all-around good guy mick foley, who has been putting his long-battered back into raising money for the prevention of sexual assault. heck, huffington post even made him their "greatest person of the day". in all seriousness, foley should rate as one of the most fascinating characters currently living for his mix of intelligence, humanitarianism and, um, testicular fortitude and it's not terribly surprising to see that he's doing his best to see that the battered image of men doesn't fall completely beyond hope.

arm & hammer multi-cat clumping kitty litter :: given the number of cats in our household, i'm assuming that this one doesn't require a lot of explanation. as i'm fond of saying, sometimes it's the little things that make your life a whole lot easier.


the sweet sounds of... :: long-time favourite of mine galakthorroe managed to surprise me twice with their latest catalogue update.

first up, hot on the heels of their last release "you", label heads haus arafna will be releasing another full-length album called "new york rhapsody". what's remarkable about this album is that it's actually music they wrote for designer katie gallagher for her show at new york fashion week 2009. even the idea that haus arafna was featured at a show in new york fashion week seems so implausible that i have to wonder if i didn't take a blow to the head without noticing. truly amazing is that the sound samples available on the label web site make it sound like there was no compromise whatsoever in the music, despite the more mainstream venue.

second, out of the proverbial blue, amon radek [aka maska genetik], who graced galakthorroe with two tracks on their "kosmoloko" compilation and a stunning [and long sold-out] 7" before disappearing completely from sight shortly afterward, has returned with a full length album. once again, the available samples sound exceptionally promising, full of tension and restrained menace, much in keeping with his earlier material.

both releases are scheduled to be out on june 1st on both cd [unlimited version] and the customary limited edition heavyweight vinyl galathorroe does for virtually all its full-length releases. both vinyl editions are already pre-sold out at source, meaning that they've had enough commitments from distributors that there won't be a single copy available for order from the label itself. [don't worry, it's often easier to order from distributors if you're outside europe, so it doesn't mean you won't be able to get it.]

hey... i made it through. there are a lot of things i'm looking forward to in the coming week, including a play date at my local guerlain counter and a chance to review mac's new summer collection "surf baby". but i have to say that the thing i'm looking forward to most at the moment is a nice, relaxing sleep and a few swats at the voodoo doll i've made of the neighbour.

considering that simon and hecubus had their manhood trimmed today, things are a little fractious this evening. [cats do not like things that smell like hospital and cats who've returned from the hospital do not like having their tender areas investigated by their siblings.] but i know that eventually things will calm down and return to a more peaceful rhythm. here's this week's cat photo in honour of that... 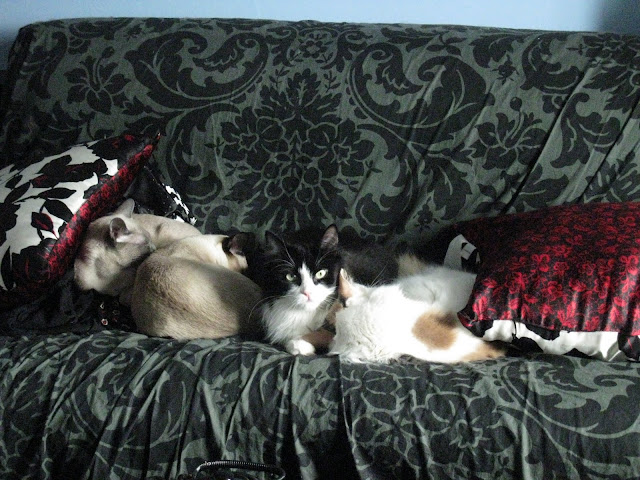