April 01, 2011
are you feeling ready for the weekend? has this week treated you well? has it been a great ride, or have you been struggling to see the spring flowers among the weeds? well, it's been a tumultuous and unbelievable week for me and while i think that the next few weeks are going to be pretty topsy-turvy, i'm happy to be able to share a bit of news that really made my week this week in friday favourites!

conversion 2- after hours :: ok, keep in mind that this is very preliminary, because we're still finalising everything for the first film, but we have a canadian partner who has expressed an interest in producing a sequel to conversion. (if you don't know what conversion is, go look at the blog!) needless to say, they would also be picking up the original conversion as well. 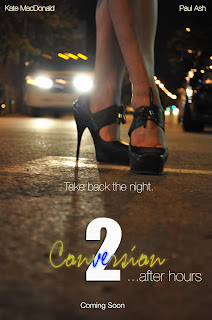 i'm only starting to work on some notes for the script, but dom and i have had some discussions with our distribution partner to get some broad details dealt with. basically, the story will follow seth and julia (looks like i may have to go blonde again) after their weird night out in the first conversion. while our two central characters may believe that they've left all those strange adventures behind them, it turns out that things aren't quite so easy and that, as a result of their having met some of those bizarre characters, they find themselves in the midst of a dangerous plot.

as you can probably tell, the angle for this story will be considerably higher-action and it will be more of an action-suspense-thriller than the original. along with seth and julia, the sequel will see the return of a few of the original conversion characters, such as irina, the eccentric woman who claimed to be in some kind of trouble and the two thugs from the parking garage. plus, of course, there will be a whole new cast of crazies to entertain and possibly intimidate.

this is way more than we had expected to get and dom and i are obviously over the moon at being able not just to garner some interest in our little project, but at being able (potentially) to follow it with something fast-paced, funny and with the potential- we think- for real box office appeal.

it may be a little early to start celebrating, but, seriously, after two years of working almost every single day on making our film, it's hard to keep from feeling like everything is finally coming together. more news, much more news, to follow

NOT MUCH CAN TOP THAT, BUT READ ON FOR A FEW MORE FRIDAY FAVOURITES AND YOUR WEEKLY CAT PIC!

you do know what day it is, right?

ok, seriously, even writing that top one was enough fun to qualify as a friday favourite, but, in case there was any doubt, there is not and there never will be a sequel to conversion in the works. we've finished up the exceptionally long and agonsing process of the sound mix on conversion and we're a few tweaks away from a complete, gift-wrapped, ready-to-watch film that will hopefully be making its debut in a theatre near you and, yes, there is a lot more news to follow soon, but that's all.

april fools' day at think geek:: every year, these guys come up with the most remarkable selection of imaginary toys for kids of all ages with two much imagination to begin with. this year's haul includes glasses that remove the world's distracting 3-d effect to make it more like watching a regular movie, a playmobil apple store and more...

the worst thing about this is that some of their incredible toys deserve to be real, but take heart!!! their "tauntaun sleeping bag" proved so incredibly popular with site visitors that they actually started manufacturing it. what will make the cut this year?

sephora pointe claire:: i mentioned this earlier in the week, but i wanted to give an extra word to the great staff at sephora in the fairview shopping centre. normally, you wouldn't see me use the words "fairview shopping centre" without the word "trapped" or "hostage", but the promise of goodies lured me there.

historically, my experiences with sephora stores haven't been great. they kind of remind me of those ads you see about home depot, where the lone customer wanders around the store desperately trying to find help. i guess that big business figured that women needed their equivalent experience.

but the folks at this store are just a fantastic balance of friendly and helpful without making you feel like you've been targeted for membership in some weird ufo cult. customer service is not dead.

march is over:: i hate march. i almost always have the worst month of my year in march and 2011 did nothing to break that trend. snowstorms, stalled job search, sound issues with the film, sickness... but that's all behind us now. because today, i'm just foolishly happy it's april and i'm once again ready to take on the world. in fact, i did just find a job posting for "dictator of earth" that i'm thinking for applying for... remarkably few qualifications required. i think i'm a good match.

a very happy april fools' day to everyone. i'm personally looking forward to a continuation of the milder weather we've been experiencing, a continuing improvement in my health (cold is still hanging on a little, but i'd say it's gone from a category 3 to a mild depression in the last few days) and to doing some writing work for the first time in forever. it looks like one of my stories will be appearing in the next issue of paraphilia magazine, assuming i can get my act together and get it edited on time! (you can see other short stories, as well as some music-related interviews i've done in past issues.)

i'm also looking forward to the fact that the coming week will bring two opportunities for me to dj: the first on wednesday night at cagibi (april 6th) and the second installment of "the caustic lounge" woth mr. dna. following that on saturday april 9th, i'll be doing a more dance-focused set at "kill me now" a classic goth night that takes place at cabaret playhouse. hope to see you montrealites there!

and finally, here's this week's cat photo, from the macdonald-marceau cat farm. it took our little princess a good couple of weeks to accept her new brothers, but, as you can see, the awkward stage seems to have passed.