April 09, 2011
i'm one of those people who generally has to be dragged to a doctor under heavy sedation. it's not that i'm afraid, it's just that every time i go, i either leave with drugs or shrugs- they can medicate me, or it's just something i have to live with. i think what i'm really looking for is a system whereby they hook me up to some futuristic machine, twist a few knobs and presto, my problem is solved.

however, i have to say that i'm tempted to go see a doctor for the latest bit of bodily strangeness i've encountered, just so i can watch their face turn from smug professionalism to looking around to see if there are hidden cameras recording a joke. i've been vaguely aware of this for a while, but last night was the first time that i really paid attention to what was happening. 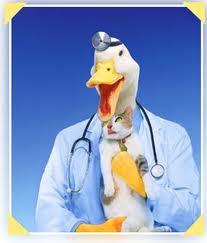 on the upper left hand side of my chest, north of b00btown, just south of clavicle ridge, there is a slightly soft spot. maybe that's normal. it kind of feels like i have an equivalent depression on the right side, but it's not as pronounced. it's much easier to locate when i'm in a relaxed position than when i'm sitting straight up and it's only in a relaxed position that i can make it perform its little magic trick.

if i gently poke at the soft spot, i immediately start to cough and i can feel my heart flutter like i have a tremor. as soon as i stop pressing, the heart tremor subsides, but the coughing can persist- and, in fact, can get worse- over the course of several hours.

i like to think i know a thing or two about how to put together a human body, but i can't for the life of me think of what this is. i remember meeting someone who knew ninjitsu, who pointed out a spot in roughly the same area that you could tap with no more than medium force to immobilise an opponent, so i'm wondering if these phenomena are related, but that's where my ideas run out. various google searches have revealed nothing at all, so i guess, despite the odds, i may be unique in one regard. either that or i'm the only one thick enough to go prodding at a spot that causes tachycardia and coughing fits.

so, for all you aspiring quacks out there, here's the question of the moment: what the heck is wrong with me?
Reactions: