making faces :: a passion for purple

March 16, 2011
apparently, purple is the colour preferred by most teenage girls. that doesn't entirely surprise me, because in their teens, girls still identify with the perceived femininity of the colour, but they've advanced beyond the pure girlishness of pink (although many circle back in later years, that's another story). but aside from it's feminine aspects, purple has always been the colour of the outcast- an appealing thought to any teenager- the colour of the minority. perhaps it's that's why it's still one of my favourites today; i never grew out of that phase.

in fact, there are good reasons why purple is an "outcast" colour. for starters, it's an outcast from the colour spectrum, because there is no such thing as purple light. there is violet light, which many people would say was purple, but in fact, in terms of their wavelengths (which are what makes our mind register them as colours), they are distinct. violet is much closer to blue than true purple, which is a mix of red and blue. purple, therefore, is ephemeral. it exists only as a mix of other colours.

of course, originally, people didn't understand how colours in the light spectrum worked, but purple was still a special shade. the first use of purple as a fabricated colour came from phoenicia, where a colour now known as "tyrian purple" was made from ink extracted from a type of mediterranean snail. because the dye was difficult to produce, it became the purview of royalty. later on, the emperors and senators of rome adopted this shade as a sign of their nobility and thus began a long-time association of purple with the privileged classes. even after the collapse of the roman empire, when tyrian purple lost its allure and was replaced by difficult to manufacture blue dyes, a bluer shade of purple, now termed "royal purple" became the shade of monarchs.

EXPLORE THE MYSTERIES OF PURPLE AND SEE SOME LOOKS INCORPORATING DIFFERENT SHADES... 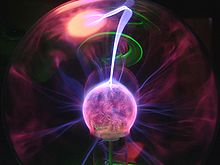 in the new age movement, purple auras- and lavender, a lighter, bluer sibling colour- are associated with wisdom, imagination and spirituality. (that last association is deeply ingrained in western culture- the coloured academic robes in french universities assign purple to those who have studied divinity.) the union of purple and mysticism goes some way to explaining why purple has come to be perceived as feminine- these areas are generally associated with the late-twentieth century burgeoning of women's studies and female mysteries, both parts of the larger feminist movement.

purple has also for years been associated with queer sexuality. lesbians in the early-to-mid twentieth century would supposedly tattoo themselves with a purple star in order to make others discretely aware of their sexual preference. now, purple is linked to sexuality that is most difficult to define- bisexuality, genderqueer identification (particularly the shade lavender) and polyamory. from the colour of kings, purple has become the colour of the resilient minority. 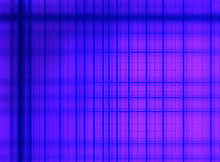 of course, purple is also the colour of psychedelia. there's a reason that jimi hendrix's haze was purple and not yellow. in timothy leary's eight-circuit model of consciousness, purple is the colour of the eigth level, the highest and most mystical, the level of quantum consciousness where the mind has evolved to its highest state.

there is no colour that has such varied and provocative associations as purple and, personally, that's part of the reason i love it. it also helps that being pale, blue-eyed and cool-toned means that purples of various sorts tend to suit me better than, say, browns or bronzes. plus there's the fact that purple is flexible. there is a range to any colour, but purple seems to express a wider variety than most. it can be closer to blue or red, but it can also mix with pink to form a bright magenta of a softer colour, like those of orchids or heliotrope. it can mix with silver or taupe/ brown to give a cooler cast to either colour. it's probably the only colour i can think of where virtually all of its incarnations seem beautiful to me.

and, since lent is in full swing, it bears mentioning that purple is traditionally the colour of lent. and of crocuses, those first harbingers of spring in canada, which (hopefully) soon be fighting their way through the last of the snow to lead their way to balmier weather.

so, in honour of all the shades of purple, here are a few looks that use them. check here to see the "official" names of the shades i've used (and see if you agree with me).unless otherwise noted, all products are from mac.

this is a look a did a while ago in fits of ecstasy of mac's 2010 "spring colour forecast" collection. i unfortunately didn't get a good shot of the lids, but basically the entire look (with the except of one shadow) is comprised of colours from part 3 of the 4-part collection. each part was based on a specific colour- pink, coral, plum and amber. does it surprise anyone given this post that plum was my favourite? these products are mostly sold out, but you can sometimes track them down through ebay or, if you live in the u.s., at cosmetics outlet stores. a few pieces (although sadly, none of the ones used in this look) are still available on the canadian mac web site. no, i have no idea how i got that nice glowing halo effect around my head, but i wish i could get it in real life.

before i wrote this blog, i wouldn't have had a clue what to call this colour, but, in the grand spectrum, this shade of reddened purple is what i think of when i'm asked my favourite colour. there are others that come close, but the lipstick i'm wearing here comes as close as anything i've tried to the exact tone i was looking for. the eye has some purple in it too, although it's more subtle. even the browns have a bit of a purple tinge to them.

mmm... deep dark purple, almost black. i'm a huge fan of dark lips, so i tend to do looks like this a lot.  undoubtedly, it'll be the subject of a future face-post, but for the time being, here's a nice, deep purple.

what a wonderful name for a colour. why is it called fandango? i have no idea. especially since i associate the fandango with warmer climes, which might suggest fierce reds and oranges, marigold tones, russets and terracottas, but not purple. and yet here it is. a lovely pink-purple shade a few strokes darker than magenta. now i feel like dancing.

"regalia"
this one was tricky to place. as you've probably sussed at this point, i'm taking the colour names here from the various shades of my lips in the images. for this one, i had trouble placing something that was a rich purple with a blue sheen. i guess that's the difference between theoretical colours and real colours. the real ones have depth and layers. just to complicate things. the blush and lipstick in this look are from the "jeanius" collection, brand new from mac- available for a limited time only.

this is one shade of purple that always scares me a little. because it's both pale and cool, it matches my own colouring pretty closely and can end up making me look a little ill. so i chose to dress it up with, yes, more purple and a pop of green tucked away on the eyelid. this lipstick is discontinued and still highly sought after. inglot has a couple of decent imitations in the meantime.

i could seriously go on about this a long time, but you get an idea of the range. feel free to comment with your feelings on purple, good or bad. what colours spark your imagination?