making faces :: in defense of orange 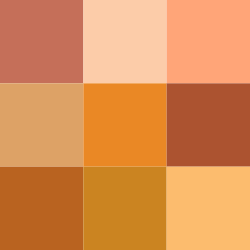 well, i wasn't planning on doing another post on a specific colour quite so soon, but i was struck by something that made me reconsider... pity. i happened across a study on colour preferences and i started to wonder: what the heck do people have against orange?

although it scores better than yellow, white and grey on a list of "favourite" colours, it leads the pack by a mile as the chosen least favourite colour (especially if you take into account that brown, which comes second, is a variant of orange). now that seems a little harsh. especially since it's something that both men and women can agree on. this despite the fact that most people agree it's the colour that they most associate with fun. jeez, you'd think that would be a good thing.

statistically, it does ok with youngsters, takes a beating with young adults, rebounds a little with those in their twenties and thirties and plummets thereafter to technicolour oblivion as a favourite. so why do we hate orange so much?

READ MORE ABOUT ORANGE AND SEE SOME LOOKS THAT MIGHT MAKE YOU LIKE IT A LITTLE MORE...

well, the same study reveals that the "cool" colours represent a majority of favourites at any age- blue always leads the way and green and purple hold their own. of the warm colours, red outperforms the others early on (except in that tricky twenties and thirties demographic, where people seem to momentarily prefer orange) and yellow takes over later in life. i did a quick survey of the people living in my apartment and both of us concurred that, if we had to pick a least favourite colour, it would be yellow. so i guess we're off the mainstream in one more way.

personally, i'd like to see those results broken down by cultural heritage. i suspect that if you interviewed people of east indian descent, you might get a very different answer. orange has long been associated with hinduism, the largest religion in india. in holland, it's the colour of the royal family and generally, the colour of the country as well (as anyone who has followed their national soccer, erm, football team can attest). not everyone has a reason to hate orange.

i'm tempted to conjecture that orange finds itself out of favour because it is the complementary colour- meaning opposite- of blue, which is consistently chosen as the most popular colour. being opposed to the popular kids has its problems, apparently.

and orange is a relative latecomer to the colour wheel. it actually draws its name from the eponymous fruit and was simply termed "yellow-red" in english until the early 16th century. apparently, it wasn't common enough to warrant its own designation. (marigolds must have been confusing for them.) so maybe people just aren't used to it yet? 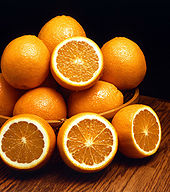 while i can't say orange is a favourite colour of mine, i do think that it deserves a little better than being the colour wheel outcast. in a way, it's a challenging colour, as bold a statement as red in some tones, or as comforting as an autumn fire and a hot cup of cider. it fairly radiates fun, yes, but i also associate it with health- orange foods like carrots and apricots are among the healthiest things you can consume. and while its brighter, juicier hues might be associated with the heat of summer, it's also the colour of halloween, just to show how varied it is.

and so, in honour of the red-headed step-child of the colour wheel, here are a few looks incorporating orange... [products used are from mac cosmetics unless otherwise noted.]

it seems that for the last couple of years, this is the "it" colour. everyone has to have some kind of coral  on their lips, or cheeks, or eyes, or all three. i can understand that, since it's a colour that can blend with a lot of skin tones. even within the coral range, there are a lot of variations, from a bright, slightly warm red to a soft pink. in fact, coral seems to combine red, orange and pink tones to varying degrees, but still rests mostly within the camp of orange colours overall. it is "officially" an orange variant. so here is an attempt i made to incorporate fashion's star of the moment.

"persimmon"
one of my favourite novels, paradise by toni morrison, has the most evocative description involving the colour persimmon and it's fired my imagination ever since. i liked this look because it's so far outside my comfort zone. warm reds, golds and browns are not normally my "thing", being cooler toned overall. the colour wheel would dictate that it's something that i should try, however, seeing as orange is the colour most likely to make my blue eyes really pop, being the exact inverse of blue. so here's what i came up with.

"tomato"
sure, we all think of tomatoes as red, but apparently, tomato is a shade of orange. i personally like to think of this colour as "blood orange" in honour of the name of the actual lipstick used and because blood oranges are just about my favourite fruit in the world (and fiendishly difficult to find in montreal).

ah, the king of the gourds, the beacon of the spookiest night of the year, harbinger of autumn, rock star of pie fillings. this lipstick really does look the exact colour of a pumpkin shell in person, but with a lovely gold sheen. another completely unique shade from guerlain... damn them...

and, since it's fairly similar to the last look in the end result, i won't enumerate everything used, but here's a quick shot of a look i did recently with mac's "neon orange" lipstick. an appropriately named colour if ever there was one, it's for when you're really ready to announce to the world that you've conquered your fear of orange.

so... are you one of the haters? or does orange tickle your fancy?