March 26, 2011
i'll admit it. my first instinct to the official announcement that the government had fallen and that we are headed for a spring election was to curl into the fetal position and howl. we all knew this was coming. the polls indicated that it would be advantageous for prime minister stephen harper to call an election, the ad nauseum minority governments we've had generally reach their expiry date around this time. the opposition have been clamouring to defeat the government in the belief that their poll numbers are soft... there were lots of warning signals.

none of which change the fact that nobody wants the damn election. i don't like stephen harper, i don't agree with his policies, i don't think he should be prime minister of the country. on one level, my opinions count for diddly, because i live in quebec and harper has managed to hold onto power through two elections without making serious inroads here. on the other hand, my opinions count for a lot, because i'm just one more reason that stephen harper isn't going to win a majority and things are going to stay exactly the f**king same whether we have an election or not.

HOW TO COPE WITH AN ELECTION: READ ON...

after the last election, i set my facebook status as "dear rest of canada: you're welcome". why? because if it weren't for the fact that harper is completely unable to convince quebeckers that they can in any way trust him to represent their interests. what does that mean? after this election, unless harper is seriously able to steamroll over some ridings in ontario that have heretofore proved completely elusive, the results of this election are going to be more or less the same as the last one and the one before that. which means that, on may 3rd, we're likely to be looking at another minority conservative government. readers in the u.k. note: endless conservative minority governments are sort of like sartre's "no exit": you pace and stress and bide your time wondering how bad things can possibly get and then you realise you're in hell.

so what to do? well, if you're like most people, you'll drag yourself to the voting booth and vote for whatever party agrees with you on the one issue you remembered you thought was important the moment you realised that the election was coming soon. or, like many canadians, you'll vote for the party whose leader has pissed you off the least during the campaign. or there will be some huge distraction over the course of the campaign and you'll vote based on the sense of outrage you feel over that. (i'd actually be ok with that, because at least a sense of outrage would mean that people were interested, which would in itself be a move forward.) or, you'll act like an increasing number of canadians, shrug your shoulders with hip cynicism, say it doesn't matter anyway and stay home. i can understand the urge.

i'd like to propose that there's another way to approach this election. think of it as your opportunity to discover your political self. rather than paying attention to what makes the news (not that that's always a bad idea), find out where you agree or disagree with major parties on issues. find out of there is any party that even addresses issues you care about. and don't get locked into thinking that issues are just the big things that you are told to care about on the news. are you having trouble finding a place in day care for your child? that's an electoral issue. have you had problems collecting employment insurance? that's an electoral issue. are you having trouble getting medical care for an ongoing problem? that is definitely an electoral issue. there are lots of examples like that and, whether you think your vote counts or not, it's worth the effort to figure out if there's anyone who is actually going to stand up for something you believe in.

a lot of people decline to vote because they don't agree with any major party on a greater philosophical basis. i understand that, but i also think it's irrelevant and old-fashioned. it's predicated on the idea that you are electing people to lead you and therefore you must buy into their greater vision of the country (or the province, or the city) in a larger world. poppycock. surely we've all passed the stage where we think that politicians should be the executors of our ideals, no? let's get this straight: you should not approach any election, ever, as if you are choosing people to represent your philosophical ideal. you should be representing your own ideal. you are electing politicians because  you don't personally have the time to work, raise a family, pursue your interests and be involved in every decision about what is don't with public resources. instead, you are choosing someone on the basis of whether or not they agree with you on mundane issues, not greater cultural or societal ones.

you are not choosing leaders; you are choosing proxies. i'm going to keep repeating that until i convince everyone i know that it's correct.

well great, but what does that mean about the fact that there's an impending election on may 2nd? well, for starters, it means that you have about six weeks to figure out who you do agree with about what policies, so let's start with something very general.

the cbc has this ingenious little widget they post at election time that asks you your opinions on a number of "typical" election issues and plots your position on a graph based on how canada's major political parties answer the same questions. they take care to caution that this is not an indication of how you should vote, but it's still an interesting tool and not a bad starting point if you're not too familiar with what all the parties stand for. you might even be surprised at what your results are. i was: 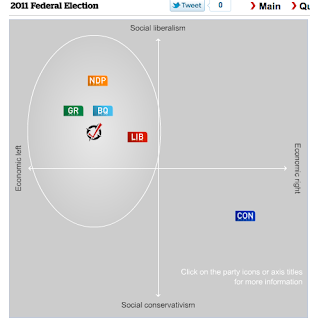 so, according to this, i should be looking at voting for the bloc quebecois candidate in my riding. of course, there's also a feature on the widget that allows you to refine your answer by responding to a few other questions: 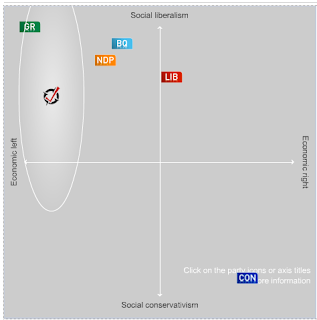 as you can see there, i'm pretty far off any of the major political parties once i start to answer some in depth questions, although i think you could say i'm about equidistant from the green party and the ndp. and if i were to stop there, it would be clear that i'd have every excuse not to vote.

but more on that later. why not try out the little widget for yourself (non-canadians are also welcome to try it for fun). you have the option of entering personal information, but you don't need to bother. once you've seen what party positions are on issues that are likely to be brought up by the media, you can start to look more closely on what their views are on issues that are important to you.