it leaks for thee 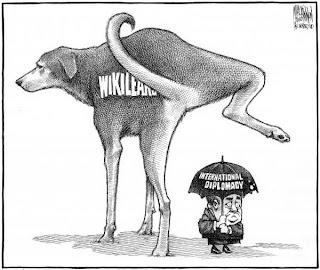 i am just getting way too lazy in my early middle age. after surprising no one by writing about the death of peter christopherson (here's a link for those who are feeling too lazy to scroll down), i decided to scribble out some thoughts on the most over-analysed portmanteau in the world: wikileaks. if i didn't, i'd probably be the only person in the world who didn't offer an opinion, although i'd like to think that mine is a little better thought out than those who have called for the deaths of wikileaks informants and of the organisation's polarising leader, julian assange. (note: if these guys wore turbans instead of business suits, they'd be on an international watch list by now.)

while a quarter million documents might provide the media fodder for a year-long series of in-depth reports, the selected method of dealing with the story has been extraordinarily muddled. first, much of the reporting has centred on wikileaks itself and editor-in-chief julian assange. there has been coverage of an interpol warrant for assange. this is the sequel to a case from earlier in the year that swedish prosecutors dropped before it went anywhere except to the news media.

i have no opinion on the validity of the case, knowing nothing about it other than the fact that allegations have been made and responses issued. if someone wants to point me towards more compelling information, i'll gladly look at it. the only concern i have about the story right now is that it is consistently presented in tandem with the story of the leaked documents themselves, as if one thing were closely linked to the other.

it reminds me a great deal of cases of rape or sexual assault (ironically enough) where the prosecutor feels compelled to bring up details of the victim's sexual history as if it is relevant to the case. it's a flagitious sort of tactic, where one talks about two issues with the same general subject at the same time, implying that they are related. basic logic dictates that, unless a victim has a history about lying about past sexual assaults, past relations shed precisely no light on whether or not a sexual assault occurred. there is a link between the two subjects- they are both sexual events in the life of the victim- but they are otherwise unrelated. so it is with the assange warrant and the wikileaks publication: both are linked, in that both are associated with the wikileaks organisation. but the link goes no further. assange may be a rapist (just as a victim may be promiscuous), but that has nothing to do with wikileaks or the information that they make available.

next, there are the inevitable questions about wikileaks' right to release government documents at all. this is where the histrionics really get started. this is where you have people throwing around the words "traitor" and "terrorist". the fact is that this is fertile ground for debate. to what extent should public figures guard their words in anticipation that they may some day reach an unintended, or wider, audience? will the knowledge that their correspondence may be made public stifle diplomats in their communications with their own governments? for people government, where should the line between private and public be drawn? unfortunately, these questions are hardly being asked, or if they are, there isn't anything like adequate space being allotted for a rational answer. many of the people (myself included) who advocate the right of a group like wikileaks to publish documents as a way of keeping governments honest should take a moment to recall their reactions when robert novak decided it would be fun to blow the cover of cia operative valerie plame, ostensibly as retaliation for her husband's criticisms of the bush administration. there is a discussion that needs to take place about when and how information is made available, but there aren't any signs that that''s immanent.

then of course, almost as an afterthought, there's the question of what's actually in the documents that have caused such an uproar. it seems like in the screeching, hyperbolic debate over wikileaks and over the act of releasing, very few have had time to look at the material in question. as far as i can tell, there seem to be different levels of diplomatic embarrassment going on.

the top tier, which is most of what major media are covering, comes from communications that have the salacious allure of gossip. vladimir putin had been described by someone as an "alpha dog". (i'm reasonably certain that people have referred to me in less polite canine terms and it doesn't keep me up nights.) libyan leader mumar qadhafi has a contingent of buxom ukrainian nurses. benjamin netanyahu is polite and charming, but doesn't do what he says (which i'm not certain makes him unique among politicians). these snippets are absolutely not newsworthy on their own and would only warrant mention in the context of a discussion about when and how diplomats should be allowed to speak bluntly. yet this seemed to make up the majority of what was being reported this morning. such coverage is time-wasting, but also sinister, in that it downplays any real import attached to the documents released.

the second tier, receiving the next largest amount of coverage, are the "revelations" that should be revelatory to no one who has not spent the last twenty years in a hole under a rock at the bottom of the ocean. arab leaders are mistrustful of iran, although they wouldn't say so in public? let's say that in a slightly more detailed way: the hereditary monarchs of countries with massive islamic populations are suspicious and feel threatened by the leader of an islamic theorcracy whose government came into being by overthrowing their hereditary monarchs? i'm stunned. (if you take the time to read the linked cable in its entirety, you might notice that there are some interesting- more interesting to me at least- phrases on saudi economic relief for iraq that have gotten no media coverage that i've seen.) there are other examples of shocking statements that should shock no one, they're not hard to find. perhaps they serve as confirmation of long-held suspicions, but they're hardly earth-shattering. the idea that world governments are up in arms about this makes it clear that the issue is not the information, but who controls it.

which brings us to the final tier of information, which isn't really being discussed, at least not to the extent that it should be. perhaps the most damning information hidden in these pages is the revelation of what those in power think of us, the people whom they are sworn to protect. noam chomsky has weighed in, saying that the information released reveals a hatred for democracy on the part of world leaders, given the difference between their positions and the beliefs of the people they purport to represent. ironically, the one place where this issue is being pushed to the forefront is canada, where one of the most discussed cables involves a conversation between a u.s. diplomat and the head of canada's intelligence agency, c.s.i.s. in language that could in no way be considered diplomatic, jim judd let fly like mussolini from the balcony, his vitriol and contempt for the people who are, through the proxy of government, his employers, as openly exposed as, well, the diplomatic cable recapping details of the conversation.

i'd like to see more attention given to this aspect of the leaked cables- what it reveals about the relationship of those who are elected to those who do the electing. because if the real risks taken to make these documents public is to be justified, their release needs to do more than give those in power occasion to blush, it needs to redefine how those people relate to the ones who put them there, to the people on whose behalf they claim to speak. at the very least, our benevolent overlords should have to answer some pretty tough questions about what they've been doing and on whose authority. and that means that we should be paying careful attention, whatever our opinion on how we came to possess this information. we should be reviewing what they have said and we should hold them to account.

[note: the attached image is an editorial cartoon from the absolutely brilliant bruce mackinnon, of halifax's chronicle herald newspaper. i don't have permission to use it, but since this is a completely non-profit venture and the image is included because i think he represents the apogee of this under-appreciated form, i hope that the intrusion can be forgiven.]