i meant to say 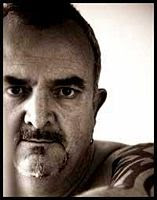 this is probably the most predictable blog post i've written, but that doesn't especially worry me. after all, being predictable in certain respects points to consistency, stability, self-assurance. nothing too bad about that. and besides, i'm writing about something that has been a constant in my life for nearly twenty years.

as many of you already know, on november 24th, the world suffered a loss, unmarked by the vast majority, but tremendously important to a small, devoted group. peter christopherson, member of throbbing gristle, psychick tv, coil and several other music projects, passed away- peacefully but unexpectedly- in his sleep. his enormous influence in underground music can hardly be overstated and it is sad to think that such an important creative force has been stilled.

although his work was decidedly off the mainstream, "sleazy" found his way into more homes than most people realise. before becoming famous/ notorious as a musician, he was a designer at the much-lauded design firm hipgnosis, who produced some of the best known album artwork of the 70s including pink floyd's "animals" and led zeppelin's "houses of the holy". he was also a skilled video director, making music clips for coil, as well as better-known acts (robert plant, ministry, sepultura, yes, paul mccartney). from the outside, he seemed to be one of those people you want to hate, because he was just so good at everything he took on.

i never met or corresponded with christopherson, not because he seemed either inaccessible or unfriendly- as far as i can tell, exactly the opposite was the case- but more out of a sense of awed shyness. i could never figure out exactly what to say to someone who'd had such an impact on my life. and that's no exaggeration. coil, more than any other band i can think of, changed my life. a lot of my musical taste developed because i was lucky enough to meet up with people who knew more about it than i did. coil are the exception to that. i'd heard of them, i'd even heard their cover of "tainted love" (which was played to me as if it were a joke and which i had taken as such), but i'd never listened to them, really. i had started doing a radio show when their album "love's secret domain" came out and, despite not knowing anything about them, i became sort of fascinated with it. there was something about the steven stapleton cover art that spoke to me. for weeks, i would pick up the case and study it, but would never listen to it, because i was convinced that i wouldn't like it and that it would somehow be a let down to the beauty of the art. but finally, one day near the holidays, when i was alone in the station with nothing better to do, i decided that i might as well give it a shot. so there i sat on a stool in the cramped record library, hunched over a stereo set up that could at best be called "quirky" and something just changed.

i've never quite known how to describe it, but there was a definite shift in the angle of my musical tastes during the hour it took me to listen to that album. and yes, rather than just scanning through to get an idea of what it sounded like, i did end up listening to every minute of it, practically without moving. it was not merely that i liked the music, although i absolutely did, but that it was one of the only times i'd found something which fulfilled everything i personally wanted from music at that moment. not having enough knowledge to sort out and imagine the possibilities, i'd never been able to envision (enhear?) what that might actually sound like, but here was a group of eccentric englishman i'd never met who apparently knew what i needed better than i did. no one had ever pointed me towards them as a band i might like (i knew more people who derided them), but, somehow, there i was, in a sort of shock, just me and coil together.

of course, an important aspect of that experience was that the band served as a door to a musical world whose existence i'd suspected, but never confirmed. there were other bands who had a profound impact on shaping my tastes, but the point of genesis was always that moment hearing "love's secret domain". and however my tastes may have shifted in the interim, i never stopped loving coil. they're one of the few bands who i feel managed to have a long career without losing quality, becoming neither predictable nor forcing themselves in an ill-fitted new direction.

i think that if i had corresponded with peter christopherson, i would have liked to have found a way to explain that to him, while trying not to sound like a sycophantic git. (i can sound like one here and feel like i'm not embarrassing myself.) people for whom music becomes intertwined with living take our heroes seriously. they may never meet us, but we follow always at a discreet distance, watching what they do and waiting expectantly for what will come next. we are bitterly disappointed if they choose to rest on past laurels and we can barely contain our excitement each time they give us something new. what we hope in return is that the burden of our expectations is an incentive and not a cage, that they take heart in the fact that around them are unseen others who believe that they are bright stars in an increasingly dark world and who feel our lives diminished by their passing.

anyone wanting to leave a final word can do so here.