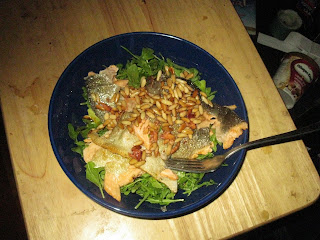 oh, it's getting down to it now... fewer teams every day and now, just about every favourite has bowed to the pressure (hey argentina, is that a nervous sweat i see?) and soon the great football feast shall be done.

i've already tipped my hat towards holland this year, but i'd like once more to rise and applaud their accomplishment. at the time this dinner was prepared, the oranje had yet to allow a goal (they let one through earlier today, but look at the results nonetheless). that, to me, deserves a second look. (perhaps that's the irish sliver of me feeling a certain bond of ancient kinship.)

and so a second look it has been given. what you see above is another fish dish from holland, one that grabbed my attention as I lolled through various sorts of recipes on line. River trout with pine nut sauce (Forel met pijnboompittensaus for the brave of tongue). it's a basic, straightforward thing with no big "secret", but that packs a real bang. yeah, that's a metaphor.

in this case, i just served it up on a plate of arugula. there's no soccer significance to that, i just really love arugula. although now that i see it, it kind of looks like it's resting on a giant green playing field.

this feast was accompanied by an argentinian wine. i'm such an adorer of the region's malbec wines, which just have so many winning qualities, it's hard to see why they wouldn't be a favourite with everyone. (yeah, another metaphor.)