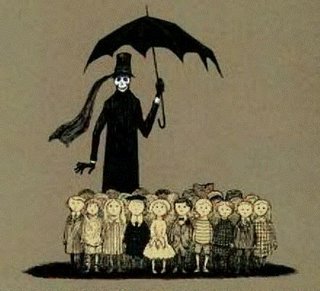 is there anyone who doesn't love edward gorey's creepy victorian illustrated nursery tales? he seems to appeal to the inner child and halloween fan in everyone, but most of all to those of us who have a slightly morbid bent anyway. who else could laugh at a series of couplets detailing the horrific demise of twenty-six overly curious, neglected or just plain cursed children, each in their own unlikely way?

apparently, the creative types at the thistle project, since they are currently presenting gorey story, a play based on the master's best-known work, the gashlycrumb tinies.

this is not the first time that someone has adapted gorey's work for the stage. in fact, there is something naturally theatrical about his stories and images. but the whole idea of being entertained by the deaths of small children is not going to be everyone's cup of perfectly steeped tea. to hell with those people.

the show is adorable. while a little heavy on the music for my tastes (not generally a fan of "show tunes"), it keeps the atmosphere balanced between the macabre and the absurd. much of the credit for this goes to the sound, a combination of recordings and the actor's voices, which is used to a striking and often hypnotic effect. each line is given with perfect cadence and diction, every breath seems weighted with significance. in the background are voices, strains of music, and bursts of those eerie, unidentifiable sounds that probably kept you awake as a child.

"gorey story" is not a play, so much as a piece of theatre, incorporating various theatrical forms- speaking, singing, dancing- to great effect. the actors are able to generate a remarkable amount of tension with the carefully choreographed motion of their bodies. this is especially true of "death", folding and unfolding in exquisite slow motion, towering above the others (the latter point thanks to a remarkable set of platforms). at times, it seems like what you are watching is a sort of human puppet show- intricate and controlled.

at just over an hour, only the most hyperactive child is going to have their attention wander during the performance. of course, it doesn't take long to figure out what's about to happen (particularly if, like me, you have a great deal of the original committed to memory), but the troupe still manages, of all things, to come up with a surprise ending.

gorey story plays throughout november at the artists play studio theatre. (a word to the wise: the theatre is normally used for dance performances and they are understandably protective of their floor. as a result, you will be asked to remove and check your shoes in the foyer. this is not the place for your 20-hole rangers.)

~WhitE-RaveN~ said…
Quote:
[...] the whole idea of being entertained by the deaths of small children is not going to be everyone's cup of perfectly steeped tea. to hell with those people.


Gorey Story sounds fun. I'd check it out if November's end weren't so fast approaching. If you enjoyed Gorey Story, you would (have) love(d) Shockheaded Peter--a show based on a concept album by The Tiger Lillies. You can still check out their music, but the show finished its run in New York last May. No idea whether there are plans to tour at all.
3:54 PM