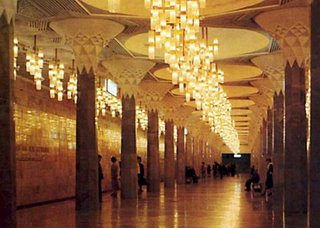 a couple of weeks ago, i ended up taking public transit to work, rather than driving. while i live in one of the most transit-impoverished cities in the world, where driving to the corner store is necessary in some areas, this was actually a lovely experience. there is just something pleasing about starting your day reading a book and listening to music, rather than getting annoyed because the guy in front of you has had his left turn signal flashing for the last six blocks. (i enjoy driving from time to time, but at heart, i'm transit girl who doesn't want to worry about finding parking.)

buses are fine, but the thrill of public transit for me has always been in the subway. for some reason, subway systems can entertain me almsot endlessly. the strangeness of going underground in one place and re-emerging in another just doesn't seem to wear off (perhaps i've killed too many brain cells). i've also always gotten a kick out of the different look each station on a metro line has, how it becomes a distinctive beacon of urban architecture.

this may sound strange, but apparently, someone agrees with me. and apparently, the unsung beauty of subway architecture is one of those things that unites all cities around the world.