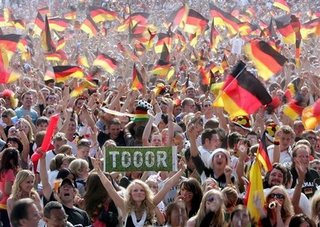 germans tend to get a nasty rep. they aren’t exactly known for being friendly, happy-go-lucky people and here they are with the entire world running wild through their national living room, like a batch of preschoolers with over-indulgent parents. granted, germany has done a couple of things that might have justiified their reputation. one could be even be forgiven for if the first thing that came to mind when looking at the picture above was not “soccer match”. but have a little sympathy for these guys. it sucks being the one hosting the big bash.

the worst part about having everyone party at your place is that you generally get stuck being the responsible one. no matter what other people say or do, you’re expected to behave, especially if you have a bit of a bad rep, because somehow, it’s going to reflect worse on you than it does on anybody else.

when it comes to world cup, there are some difficulties in being a gracious host. for starters, you can’t always depend on everyone to set a good example. second, where soccer is concerned, the world takes off its collective poltically correct gloves. this is sometimes unnerving, but not always. england’s daily mail once referred to a defeat at the hands of the germans as being acceptable because “[they] may beat us at our national sport today, but that would be only fair. we beat them twice at theirs”. the americans, who are raised to believe that there are some lines you don’t cross, were apparently completely baffled going into the olympic trials against mexico to hear chants of “osama, osama”. although i don’t recommend indulging that often, there is something liberating about giving your inner censor the boot for the day (or at least the couple of hours you’re at the game) and seeing just how outrageously you can shoot your mouth off. it can even be funny. (you’re still snickering at the “national sport” thing.)

it’s just really difficult to be forced into the position of being the adult in the room.

so in honour of the cup’s generally gracious hosts and in honour of the fact that their team has shown themselves to be above the fray in all respects... we’re eating german cuisine tonight. i have to say, i generally avoid german food because its central ingredients- sausages, cabbage, brussel sprouts, ground meat- sound like a list of causes of massive disgestive malfunction. that said, when it’s hot on the weekend, you don’t want to spend a lot of time cooking and a healthy helping of sausage (many available, find a good local butcher), sauerkraut and a nice beer to wash it down is a great way to cap off the day.

germany, you’ve managed to keep the lid on and your team has a spotless record. help yourself to a hearty plateful, because you now move on to playing argentina. you won handily, but they have already had the most lopsided result of the tournament and, from today, probably the best match so far. build your strength, because you're going to need it.