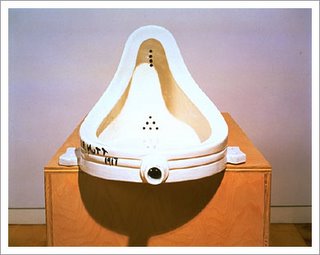 quick, what was the last comedy to win an academy award for best picture? got it? how many primarily comedic writers have won the nobel prize for literature? (you can have a few minutes to look that one up.)

have a glance through the personals section of any newspaper or on the internet and probably the most important characteristic for both men and women is that the person they date must have a sense of humour. everyone knows that one of the things that’s ultimately going to make or break a relationship is whether or not you’re able to truly, deeply laugh together, at each other and at the world. it’s a truism, something so obvious that you hardly have to say it. someone can be beautiful, intelligent, sophisticated and still bore you to death. it doesn’t take long for a lack of humour to become unnerving, to set you on edge.

so if this is so obvious in relationships, why should it be such a big secret when it comes to art? plenty of art includes humour. the dadaists would probably be shocked (and privately amused) that their work is taken as seriously as it is today. thomas pynchon routinely incoporates absurdism of a similar stripe into his novels. we show our appreciation when artists can inject humour into their work, while still being able to project a serious message, but the last part is the more important in our evaluation. we love to laugh, but the generation of laughter shouldn’t be a goal of anything we refer to as work.

(that makes the creation of art very different from entertainment, which is entirely humour based. in television, seriousness takes a back seat to comedy and its close cousin, melodrama (where we are given the opportunity to laugh at something “serious” because of its innate absurdity). on the other hand, entertainment is generally seen as disposable (and a lot of it could do with being disposed of a lot faster).)

being, in some ways, an average person. i like to laugh. i like to laugh a lot. in fact, there are very few things i enjoy more. i’m one of those people who, while i’m perfectly capable of maintaining a serious conversation, doesn’t have a lot of interest in doing so most of the time. i have, however, generally avoided letting that side of myself loose on in my writing, because, like most of us, i have an underlying assumption that that which is funny is somehow disqualified from being artistically worthy.

realistically, i know that this is rubbish, and that those rules are imaginary. but somehow, a lot of people, very intelligent people, abide by them without thinking. the rule is that great art reveals something about humanity or about life, while at the same time making an emotional connection with the individual, and that this is done by appealing to the individual’s more serious side. but why?

is it that much harder to connect with something if it makes you laugh, as opposed to if it makes you cry? or enraged? no, it isn’t. but the assumption is that if you are laughing, it means you aren’t thinking, which would be antithetical to finding a larger meaning. but that isn’t the case. the best comedy, the bits that will stick with you, is that which does make you think about both what was said or written and about why it is funny.

perhaps it’s the internalisation of those lessons of youth, that laughter is unproductive, that in order to succeed in life, we need to be serious, we need to have gravitas, or else we will never accomplish anything. this is drilled into us in school, that laughter and humour are somehow antithetical to learning. and it’s complete nonsense.

people in marketing have figured this out already. think of as many advertisements as you can. how many of them use humour? i’ll bet it’s a significantly larger than the number of humour writers who have won a nobel prize.